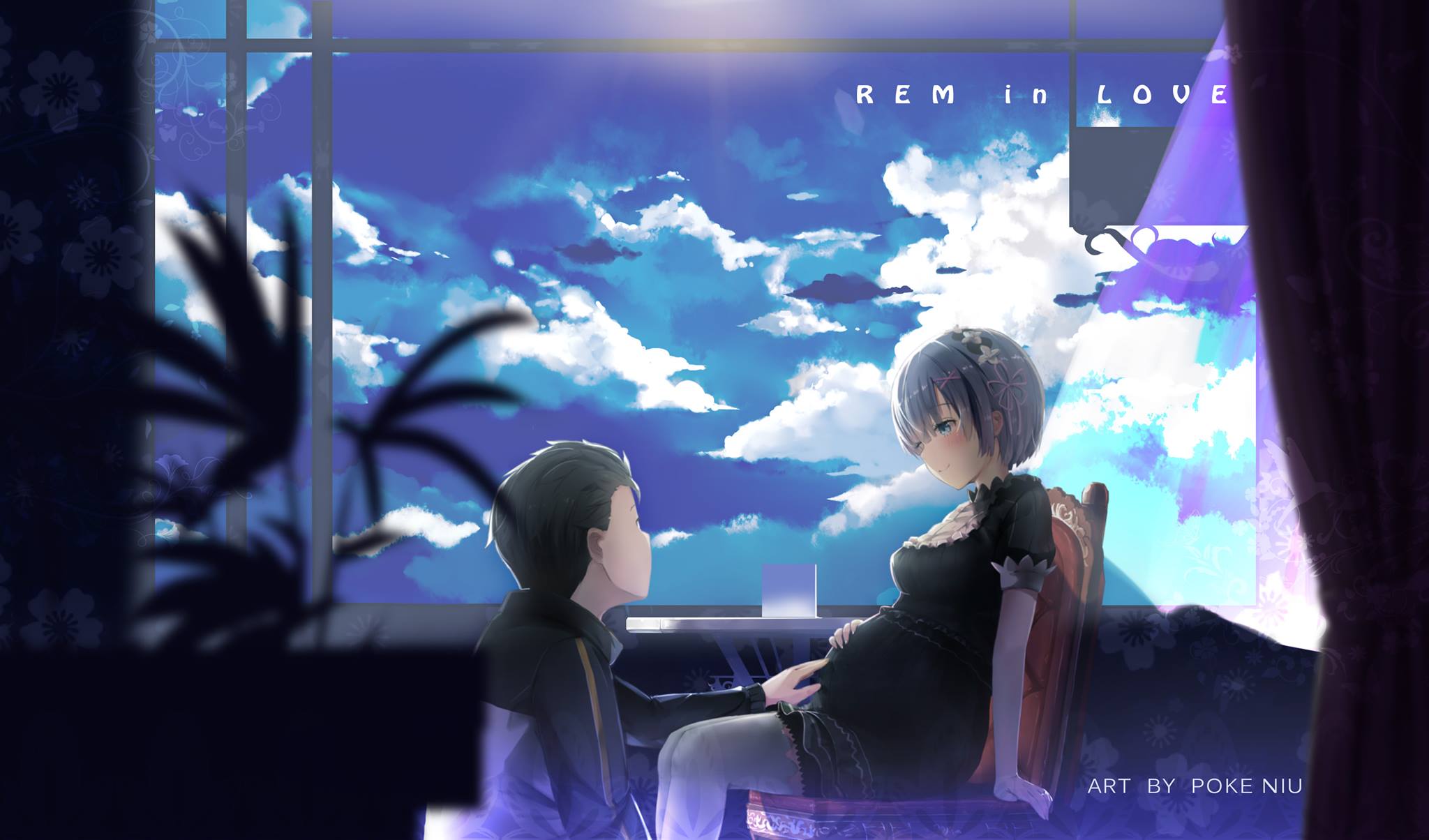 My friend reminded me of this, and boy I’m glad he did. This is what I think is an April fools what if, where Subaru has a harem found here.

[Rem: Subaru-kun. What happened to your left eye?]

[Subaru: I received a hot kiss from Felt’s fist in the eye, which she did to hide her embarrassment. She had a cute side……I got carried away with myself this time.]

[Rem: Jeez, please be careful. Subaru-kun’s body isn’t another person’s possession, after all.]

The evening passes. Rem faces towards Subaru with a smile, who came visiting the room, and she says those words like that.

Subaru shrugs at that girl’s smile and moves towards Rem’s side. He stands up, and waves at the girl to sit down, who tried to give up her spot.

[Subaru: You be careful too. Hypothetically, it certainly is true that my body isn’t someone’s possession…….but realistically you’re the one that should be careful.]

[Rem: Sorry. I should really be helping Subaru-kun in these busy times too…]

[Subaru: Don’t make the wrong assumptions. For now, it’s okay for you to rest and come see me with the greatest smile like that. That is your greatest power. Because at any rate…]

Subaru kneels before Rem, who was sitting in a chair, while saying these words. He faces towards her and reaches out with his hand. What those fingers reached were her stomach――and he understood that this sensitive girl’s stomach, Rem, was now bigger. She was pregnant with another being.

[Subaru: Our child is right in here. Just how much of it is my energy, I wonder.]

[Rem: I’m happy supporting you emotionally, but I want to support you physically too, Subaru-kun. I might be frustrated about having that role taken from Petra.]

Rem sticks out her small tongue, the girl who walks around but tries to cover up her troubling frustration.

As of now, the maid work was transferred to Petra, who succeeded her as a maid that could do roughly anything, and Rem spent spent most of the day taking care of the child in her stomach.

[Subaru: Looks like you made quite a lot of socks, huh.]

[Rem: I thought I was bad at knitting at first…… but while I was making them, it got more and more fun. I thought about the child getting bigger, then they got a bit bigger and bigger. First it’d be about the size of my thumb, my fist, my palm, an appa, then a melon…….]

[Subaru: What have we done through our sex to make it necessary to have titan sized socks!?]

[Rem: I was just thinking about it getting bigger quickly and wanted it to grow up carefree……]

[Subaru: There’s a possibility that it will grow bigger than the biggest old man I know, so I don’t like this!]

He had confidence that he’d love the child no matter how it came out, but there was no confidence that went above that level. Rem smiles with a “Just kidding” in response to Subaru’s retort and says

[Rem: Well I did realize that it was too big midway, no matter how I looked at it. Now I sewed them and made them smaller. They’re all things for children, so I also made some for Subaru-kun too.]

[Subaru: Oh. You made some for me too. That sure makes me happy. Good, this is work done courteously by Rem filled with love. I’ll always keep them with me.]

[Rem: Yes. There are mittens, socks, belly bands, loincloth, a scarf, a hat, underwear, undergarments, a coat, footwear, and greaves.]

[Subaru: Is there knitting wool left for the kid’s clothes!?]

They were various knitting works presented one by one. If he wore all of this and tackled his duties, he’d probably become groggy from the heat in 10 minutes.

Leaving a skillful person be with steady preferences would result in something like this.

[Subaru: It would be tough to wear all of this and do work…… can I wear them in rotation?]

[Rem: Don’t worry. I’m satisfied just by having you accept my gifts, Subaru-kun. Just from that, the time I spent knitting pays off.]

[Subaru: I’ll use each and every one every day! You don’t have to imagine such pitiful things!]

He puts on all the knitted material and says “Like this!” as he shows them off. Rem claps appearing to be deeply moved at Subaru’s enthusiastic, gallant figure.

[Rem: Looook, your father is this nice of a person. You want to show your energetic figure soon, huh~]

[Subaru: I wonder, if it saw me like this right now, would it know who I am when I’m not wearing these? Daddy is a little worried about that.]

[Rem: Don’t worry. It’s my child, so it’ll love Subaru-kun. So no matter what Subaru looks like, it’ll know who you are immediately.]

[Subaru: But it’s half my child too. I’m worried about it’s recessive genes on that front.]

[Rem: Subaru-kun is always lovely. So, if it turns out like Subaru-kun, then this child will definitely be a lovely one.]

Rem speaks in her usual manner at Subaru, who pouts with his lips, while rubbing her stomach. Rem’s overvaluing of Subaru did not change at all. Not a single bit. That’s why it was necessary for him to always try his best to overvalue her greatly to correspond with it, so that hers didn’t pile up.

Therefore, the power she gave him truly was an amazing amount.

[Subaru: Hard to say. Either way, if it turns out like Rem, then I think it’d be cute or handsome, but if turns out like me, then it’ll inherit these eyes…..so I’d feel bad if it was a girl.]

Furthermore, it seemed like Subaru’s mom, who had eyes just like him, had rough times with her childhood. Since she always looked displeased with her eyes, the female classmates who were frightened just from walking the road brought her candy, so she was kind of always stuffed.

The person who lived life without being aware of her eyes’ demerit was Subaru’s mother. It wasn’t hard to make a guess for his daughter that hadn’t even been born yet that she’d be like that mother.

[Subaru: There’s not a fragment of heredity left for the bad of my family lineage eyes. My grandfather from my mother’s side and the grandfather before that seemed to have bad eyes. So, there’s probably a high possibility that it’ll inherit it.]

[Rem: Then would you prefer it to be a boy?]

[Subaru: Well back at my home town they do say it’s good to have a girl first then a boy. I feel like…it would be easy to raise them if it was first a girl…then a boy.]

[Rem: Jeez. I don’t know which one you prefer when you put it like that.]

Rem pouts with her face as if she got angry in response to Subaru having his conclusions go all over the place. He pokes that face with his finger, and after removing that atmosphere Subaru smiles at her and says

[Subaru: So, either way is fine. Actually, I don’t think that’s quite right. I mean that whichever comes, I’ll love it, and it’ll feel my love.]

[Subaru: If it’s a girl, well then I’ll treasure her and love her, love her so much, and I’ll spoil her, spoil her oh so much when raising her, and she’ll love me. My goal is to have her say “I want to be daddy’s wife for the future!” until she’s in middle school, about around there. Being treated with love by one’s daughter is a complete win for a father of this society, although I’m already a complete winner for having a wife that’s too cute.]

Rem blushes at those compliments that came out as if it was a stream.

While gazing at Rem’s blushed face with love, Subaru raises his finger and says

[Subaru: Then, if a boy is a born, I’ll pass down my father’s tradition and I’ll be the biggest obstacle to him, the greatest rival, and the greatest partner in crime. We’ll bump into each other constantly and relentlessly, and I’ll be a lion that pushes him over and over towards the abysmal valley! Ahhh, I’m looking forward to it!]

He says “Thus”, and continues to speak

[Subaru: Rem, don’t worry that much. Simply think about giving a healthy baby. It’ll be alright, be super relaxed. You, who I love so much, will give a super lovable baby. There’s no way I won’t love it to an extreme extent, you know?]

While looking at Subaru’s exaggerating actions, Rem makes a happy smile with her lips. Subaru looks at that smile, and it causes him to feel an unavoidable sense of itch and he couldn’t handle it, so he says

Just from him calling her name and bringing his face closer to her’s, Rem also could guess what he was asking for.

Like that, Subaru brings his face close to Rem, who closes her eyes, and then his lips meet hers.

It was a soft feeling, and somewhere along the line, her tongue nervously reaches out.

While entangling their love, Subaru held her tight the whole time.

13 thoughts on “Harem What if(Rem part)”